A Guide’s Day Off- Lewis Lake by Josh Gallivan A Guide’s Day Off- Lewis Lake by Josh Gallivan

After a busier than usual summer fishing season one might imagine a guide’s day off would be spent relaxing, catching up on chores at home or even an adventure doing your other favorite summer pastimes. For me it’s typically a combination of all three but for GTFF guide, Josh Gallivan, who by the way never takes a day off unless forced, spends his off time fishing. Enjoy!

A Guide’s Day Off- Lewis Lake

Days off during the summer are non existent. So when I had a random day off with no booking on Monday the first thing I did was wake up early, start the coffee, breakfast, pack the truck and cooler and took Jess up to Yellowstone. We were sipping our coffee out of our YETI mugs and watching the beauty around every corner. The migrating animals, the red and orange hillsides. We followed the Snake River up into Yellowstone and on the way I remembered all of the beautiful fish I had caught with awesome clients this summer. We were loving every minute of our first day off together in some time.

Our plan was to fish Lewis Lake, one of my favorite places in the world. In June the dry fly fishing on this lake is insane. If you know where to park the boat and you time it right, you will find big brown trout gulping dry flies in shallow water. It is one of my favorite events of the year. Some days we will make a marathon out of it and fish Yellowstone lake early, followed by Lewis Lake in the afternoon, and finally Jackson Lake in the evening. This is a trifecta of superb lake fishing unlike any other place in the world. It is unlike any other place in the world because of the two national parks where you will find a total of 5 different species of trout, two of which are native to those regions alone. (Snake River Cutthroat and Yellowstone Cutthroat.) Most of the time we sight fish on the lakes and Monday on Lewis Lake was no different.

We launched the boat and parked the trailer and ran straight for my favorite spot which took us about 30 minutes with my 3.5 HP kicker motor. I was especially excited to try my new fly lines from AIRFLO which included the sixth sense camouflage lake specialty line in an intermediate taper and the sixth sense 5/6 full sinking lake line. Jess was up first while I was on the oars. She fished hard for a good hour before we found a fish. Finally on a perfect 60 foot cast she started stripping slowly and within 5 strips she came tight to a beautiful big brown. I told her how beautiful these fish were and how acrobatic they were, but she had to see it for herself. 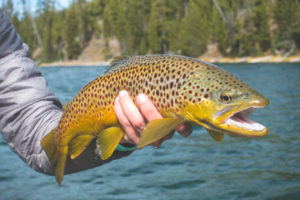 These fish really love a certain olive leech pattern with very little weight. I have found them to spook easy if your fly lands too heavy. I rely on the full sinking lake line to slowly bring that fly a few feet below the surface and into the strike zone. The smaller and lighter the fly the better. Finally it was my turn and as Jess sat down and pulled out the hummus and crackers and opened a bottle of wine, I was putting on a clinic up front. We had finally found the pod of fish I was hoping for. We sat in one spot for more than an hour and caught fish after fish on every cast. Those of you who have fished out there with me know exactly what I’m talking about. It was madness. I would put down the rod only long enough to pour more wine then get right back to casting. The highlight of the day was when I found a pod of big fish that were refusing the streamer and were spooking easily. They wouldn’t spook far though and would come right back to the pod. I rigged up a dry dropper and casted it out in front of the group. As I landed the fly softly and waited for the nymph to sink, in complete confusion I watched a 20 inch brownie do a total back flip on my dry fly. I set the hook out of habit but was still in complete shock with what had just happened. I landed that fish and casted again. As soon as my fly landed another fish did a total backflip for the oversized dry fly. I was freaking out and trying to explain to Jess why this shouldn’t be happening. Time and time again I was hooking and landing these fish on dry flies. I would have stayed till dark and probably froze to death out there if it weren’t for Jess reminding me of the time. It was one of the most incredible experiences of my life! Magic on the Fly