If you know him, he needs no introduction. If you are new to our program and team, meet Josh Gallivan, guide, dad, adventurer, photographer and just a really honest & good dude. Josh is the kind of guy, when you meet him in his element, typically fishing or being outdoors, you come away with a sense of knowing more about our world and more importantly, feeling positive. The stoke is high with this guy and so far it has led him to remarkable places.  Travel runs deep in Josh and due to his experience he is very valuable to have hosting guests to remote corners of our fishy world.

The following are notes from his recent epic journey to the jungles of Bolivia, in search of golden Dorado~ The fly fishing in Bolivia has to be seen to be believed. In October of 2022 I was lucky to host my good friends, Bret, Forrest and Colin to the Pluma lodge in the Bolivian jungle. We decided to do the helicopter program, giving us access to the wild and remote headwaters of the Pluma river and its tributaries. This is the best place in the world to chase iconic species on the fly such as, Dorado, Pacu and Maturo catfish in uncomparable quality and quantity. Bolivia is well known in fly fishing circles around the world, and for good reason. Our trip there exceeded all expectations.

Traveling to Bolivia was a breeze. The flight from Houston to Panama is only a four hour flight, followed by another four hour flight to Santa Cruz de la sierra, a beautiful Bolivian city nestled in the Bolivian Andes. The moment we landed the air smelled different. This happens a lot when traveling, with the smell of burning trash and the sounds of roosters crowing at the break of dawn, I felt right at home. Upon landing at the airport and after immediately trading in my street shoes for flip flops, I could pick out our host Mr. Zoltan right away. He had a fishing shirt and a patagonia hat on in a sea of people with soccer jerseys, and was there to take us to our hotel that night. Needless to say the stoke was high as we talked with him about the fishing, and how other groups before us had done. We rolled down the windows and enjoyed the smells and sights of a new city, we were getting closer to our goal and ready for the experience of a lifetime in the Bolivian jungle. 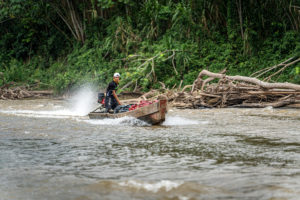 The following morning we took a small charter plane to the Pluma lodge. The moment we landed on the grass airstrip I knew we were in good hands. The Tsimane people walked out from the village to greet us, little kids were playing soccer, old men were standing around smoking cigarettes, families were cooking breakfast over open fires, it’s almost as if time stood still, or completely forgot about this place altogether, I’m not sure which. Our bags were immediately loaded onto dug out canoes and were used to transport us about an hour and a half up river to the Pluma lodge where we would spend the next 6 days fly fishing the many tributaries and rivers in the Moseten mountain chain.

The moment we got to the lodge I was handed a fresh fruit smoothie and for the next four hours we unpacked gear, rigged rods, drank a couple beers and enjoyed the sights and the sounds of the jungle. It’s very rare to be so comfortable in a very uncomfortable jungle, but this lodge has all the amenities of home including, your own bathroom with a walk in hot water shower, queen size bed with bug netting, armchair, desk, wardrobe, and your own front deck and sitting area. Appetizers were served around 5:30 and dinner not long after that. We ate like kings that night and enjoyed a charcuterie board with beautiful meats and cheeses and had homemade pasta for dinner followed by a beautiful homemade chocolate mousse for dessert. We were living the dream and we hadn’t even caught a fish yet. The following morning the helicopter picked us up at 8. We split into two groups of two and for the next 6 days this would be our routine. After a short 20 minute helicopter ride we landed in wilderness that would have taken us six days of bush bashing to get to. The fishing reminded

me of trout fishing in a way. It’s very similar to creek style fishing where you are fishing pocket water in between boulders and structure, very similar to the Gros Ventre river back home. We were not fishing for Snake River cutthroat though, instead we witnessed some of the most aggressive takes I’ve ever witnessed on fly and caught multiple Dorado, Yatorana and Pacu.

After fishing all day we were transported back to the lodge where we would share stories and sit around and eat a delicious dinner with some beautiful Argentinian and Chilean wines, a true luxury while fishing in some of the most remote jungle wilderness I’ve ever seen. Over the course of the week we all caught the fish of our dreams. Bret was fairly new to fly fishing and I witnessed him not only succeed at the sport but also fall in love with it, which is most important. One of the highlights for me was catching my first Maturo catfish on the fly. It was the only rainy day we had, and we were sitting next to a big beautiful pool waiting for the rain to pass when I spotted a massive 6 foot catfish moving around in the pool. I snuck out in front of it and casted multiple times and after the fifth cast the fish aggressively ate my fly. I was ready to give up when I saw the body language change and even in 6 feet of water I could see the fish open its mouth and inhale by black streamer. I set hard and drove the hook into its mouth and then hung on for the ride of my life. After about ten minutes I landed this 150 pound catfish on my 9 weight, the apex predator of the river. Bret and I and our guide JP were shocked and we had a good photo session with this beast. There were other moments too, like when I saw Bret cast at a dorado that was in a tiny piece of holding water, about the size of a bathtub. You could see the fish perfectly, and from 40 feet away Bret put the fly right on the fish and immediately came tight to a 20 pound dorado. The fish jumped multiple times and was eventually landed in the next pool downstream of us. I also watched Bret hook his first pacu, which is considered the freshwater permit. As soon as the fish ate the fly it took off and there was no way Bret could stop it. The fish nearly ran 200 yards, and eventually wrapped itself around a rock and shredded the fly line. It was a sobering moment for all of us and I quickly realized there is more to these fish than meets the eye. I also watched Colin become completely absorbed by the sport. His casting was beautiful, and his loops were tight. Eventually he was able to throw a longer cast with ease and by the end of the week the fish didn’t stand a chance. I watched Colin spot, hook, and land a 25 pound dorado like it was nothing. Forrest had a brilliant moment when we saw a huge dorado sitting on top of a massive boulder. The top of the boulder was only a foot below the surface so the dorsal of the fish would sometimes breach the water. It was an exciting moment for all of us when Forrest started to strip line out to make his first cast. The moment the fly landed the dorado ate it, but Forrest kept stripping and never came tight. Only after the chaos ended we realized that the fish was swimming at us faster than Forrest could strip, so the hook never came tight. As with any good fishing trip, the people that are on it with you add to the overall experience. I’m lucky that I get to host trips around the world and fish with many different people over the years. Getting to fish with Bret, Colin and Forrest was an incredible experience and one that we will share for the rest of our lives.

The overall experience at the Pluma lodge was incredible. It’s a perfect mix of carefree luxury in the midst of pristine nature. Our two guides, JP and Nicholas were an absolute pleasure to have with us. And the lodge manager Vicente Lorente or “Chuky”, was as professional as could be. The rooms were clean and comfortable and the food was outstanding. The lodge staff was attentive from the servicing of the rooms every day to the way they folded our laundry and put a bottle of water next to the bed at night, no small detail was overlooked. I’ll remember fondly my trip to Bolivia. After all these are the moments I live for. Fly fishing and travel is my passion and it always will be. I’m lucky to gain relationships with the landscape and its people along the way. ~Josh Gallivan 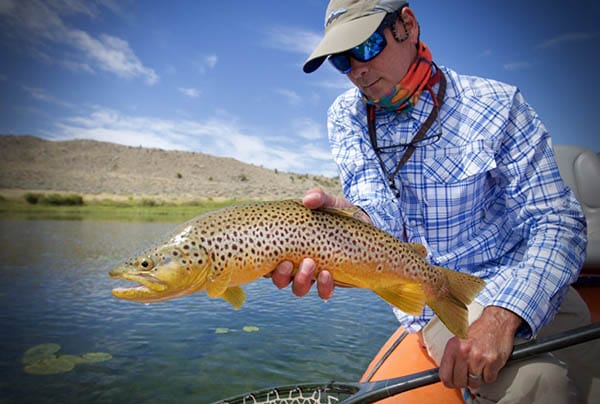