I’ll be completely honest. If it was not for Catch and Release practices really catching on in the last few decades, I don’t think we would have much of a resource to share and/or business as a recreational fishing outfitter. I have lived through and witnessed the big shift to C&R in what I define as inland, closed-system fisheries. Our inland rivers, small streams and lakes are systems that are preferably, self sustaining populations of whatever gamefish resides in your region- trout, bass, panfish, walleye, perch, pike, stripers, musky, the list is long. The converse to this would be coastal, open-system fisheries that have vast areas of habitat and many of the gamefish are seasonal migrants, either for spawning or feeding reasons. Both of these systems have been effected from increased harvest, angling pressure and other factors, namely pollution. You will find strict regulations nationwide that offset these pressures, yet without willing, proper catch and release on many inland fisheries from dedicated anglers we would see decimated rivers and lakes struggling to grow healthy spawning class fish everywhere but maybe the most remote and least populated areas of the country. It’s just a fact, people love to catch fish and most of us love to eat them if it is safe (and we should, I still harvest often). We are mere herons with large brains and an unlimited means of tricking a fish into striking a hook, furthermore, everywhere you look one of us is standing there on a point or beach, or floating by in a fifty thousand dollar rig, covered with the best electronics money can buy. Simply put, our beloved fish don’t stand a chance, therefore superior catch and release ethics are paramount for us all to sustain what we love into the future.

Years ago, to me, catch and release simply meant throwing your catch back, that was about all the thought I gave it. Over time, I began to revere my quarry  more and more and instead of a thoughtless act of tossing a fish back I began to have deeper feelings for its care and health, I wanted the fish to thrive after its release. To this day it is one of the reasons why fly fishing is a bit more appealing overall for me as a means of catching fish. I still use conventional gear so I am certainly not saying fly tackle is above anyone but I will admit a single hook is my preferred choice, fly or spin.

A single hook is a statement you are a sportsman, you care about conservation and your ego is in check. Taking it one step further, let’s make that single hook barbless. Once a hook is barbless a couple things happen, your line and landing skills sharpen, then your release times, especially for smaller fish are cut in half or more. These are the moments that help our fish suffer significantly less stress and trauma, hence they thrive after their release and are much more likely to respond to an artificial again, perhaps sooner than later. For me the use of a single, barbless hooks is the epitome of modern day catch and release techniques. 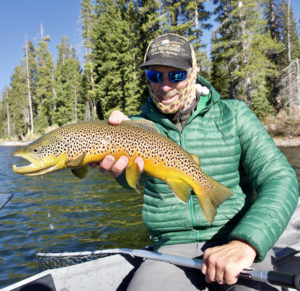 Next, comes a proper rubber-release net and plan, minimizing time out of the water. Let’s imagine we just landed a massive brown in July, water temps are in the mid 60’s, fair but not favorable. The fish is stunning and we need a quick photo to cherish the moment many years to come, what is your protocol? First thing is to keep the fish wet, in the net, below the water line. Take a moment to clear the hook, keeping the fish wet. Discuss with your angling partner a photo plan, have the camera ready and then execute quickly, it’s that simple. A great ‘grip n grin’ capture, with water dripping from the fish’s gills should only take 10 seconds or less. Afterwards the fish is back in the net below the water line. Take a moment to admire and evaluate the fish’s health and begin its release. If everything goes well that brown trout should blow out of the net quickly, a very good feeling and confirmation you did it right.

Now it should be noted, handling any fish for a photo requires a skill set that is not easily learned. Holding fish is a challenge, they seem to sense you have no clue and will wiggle right out of your hands and fall to the ground or floor of the boat, a situation that needs to be avoided at all costs. The caudal peduncle is the narrowing zone before the fish’s tail. A firm and steady grip here is needed before lifting a fish, in this case, typically trout (other gamefish it is fine to lip them, like bass). As a guide, I always ask a guest their ability and stress that it’s ok for me to hold the fish so they can grab a proper photo. First priority is the fish’s health, second is your photo. Besides, a photo of fingers and a gapping fish’s mouth is much less attractive. Guides are very skilled at making you and your catch look great, always trust them.

You just need to remember to smile!

Thanks for reading and share if you like our content. Please, practice thoughtful Catch and Release, especially in the summer months when there is less dissolved oxygen in many drainages.

See you out on the water!